This was an ugly week on the Presidential campaign trail. As a conservative it’s not my habit to call out a GOP candidate this early in an election, but this week one of the candidates was so vile it’s hard not to speak up. In case you missed it here is (click here) Trump calling for the total ban of all Muslims entering the United States. A total ban, you didn’t read that wrong. This is dangerous in its very nature.

Don’t be fooled, Trump’s impulses are decisively authoritarian and are unfit for our system of government. Not to be too stark, but such remarks will be a tool for the recruitment of extremists. And consider this if he were ever elected would you imagine a President Trump, ever standing for impeachment? Wouldn’t he just shut Congress down, send in the troops? Imagine the chaos and degradation to our society with such a man in office.

Consider this passage from Plato’s Republic on the tendency of democracies to sometimes divert into tyranny when we lose our sense of proportion and restraint/limits. From Book VIII:

“‘Do you notice how tender they (the notion of freedom or say security) make the citizens’ soul, so that if someone proposes anything that smacks in any way of slavery, they are irritated and can’t stand it? And they end up, as you well know, by paying no attention to the laws, written or unwritten, in order that they may avoid having any master at all.

‘This is the beginning, so fair and heady, from which tyranny in my opinion naturally grows.’

‘It surely is a heady beginning,’ he said, ‘but what’s next?’

‘The same disease,’ I said, ‘as that which arose in the oligarchy and destroyed it, arises also in this regime- but bigger and stronger as a result of the license- and enslaves democracy. And, really, anything that is done to excess is likely to provoke a correspondingly great change in the opposite direction'”

Why does Plato recount this? Simply this, when there is strong discontent in the polis, the opposite of its ideals can take hold as a means for change. The very thing that is pronounced as the most important, becomes a tyranny when there is no restraint or bounds for this good.

That is part of what we are seeing in the candidacies of the extreme with Trump and Sanders. In times like this, it rests with those who can still articulate a moral vision and cohesion for society to speak up and engage . As St. Paul says we are to be engaged. In the world but not of it. Engaged with the ideas but not reflecting the stale incarnation of bad ideas.

Advent is a really interesting time liturgically for the church to consider the themes and realities of hope in the midst of discord and confusion. We are preparing for the coming of the King of Kings, but waiting like the people of God had to wait, in that expectation, that reality of pain and anguish and exile and separation, waiting for the coming of the Messiah.

It’s one of the reasons I have always loved ‘O Come, O Come Emmanuel’ and this year having discovered a really interesting version of ‘What Child is This?’ (click here to listen). Consider this line:

“Nails, spear shall pierce Him through, The cross be borne for me, for you. Hail, hail the Word made flesh, The Babe, the Son of Mary”

The Savior to be born, the incarnate one. Incarnate and suffering pain, much like many in the world today are and will.

Consider these words from On the Incarnation by St. Athanasius:

“But, what is most marvelous, being the Word, he was not contained by anyone, but rather himself contained everything. And, as being in all creation, he is in essence outside everything but inside everything by his own power, arranging everything, and unfolding his own providence in everything to all things, and giving life to each thing and to all thing together, containing the universe and not being contained, but being wholly, in every respect, in his own Father’s alone.”

How much boldness and suffering is a part of transformation and wholeness. Consider this painting by Guercinoi (1621) on the Doubting Thomas 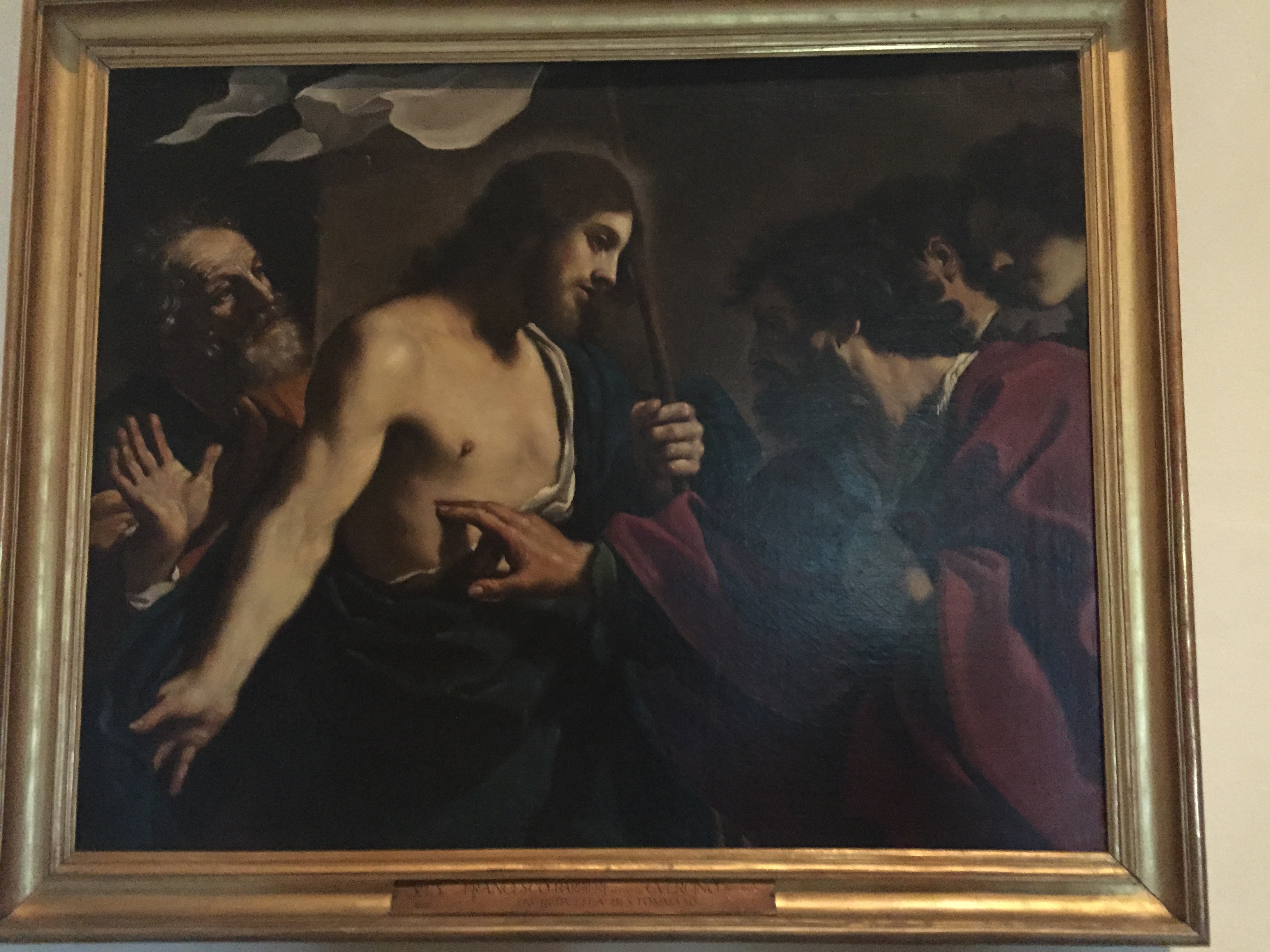 St. Thomas touches the Risen Lord with his visible wounds. Wounds that are still present but transformed. They are no longer wounds that lead to death but are embodied into new life and new creation.

This is the sort of healing that is needed in the body of Christ. Healing the remembers the very real wounds from its own members, disfigurement caused by sin and anger, sins that mark the relations between churches (Catholic and Anglican or Presbyterian and Methodist) and between peoples (Russian and Ukrainian) but that must be made whole so that new life can be created. This is part of what we are hoping for and building on in this season of Advent.